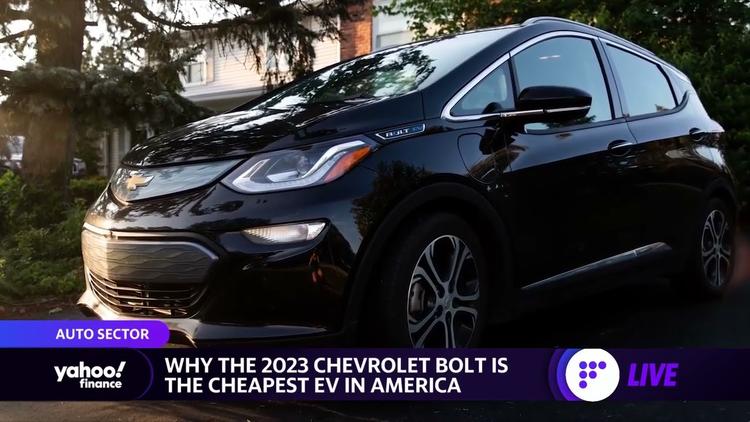 Ann Arbor (Informed Comment) – General Motors has just slashed the cost of its struggling Bolt by over 18%! If you just go by the sticker price, the base 1LT (Luxury Touring) at $26,595 is now the least expensive electric car in the US market. The 2Lt comes in at $29, 795. So reports Pras Subramanian at Yahoo Finance.

Subramanian says that GM assures us that it is not cutting anything but the prices. These are the same cars as were 18% and more higher in price last year. It is a remarkable development, given the inflation in materials seen this year as the world comes off the pandemic lock downs and once-idled factories.

Article continues after bonus IC video
Yahoo Finance: “Why the 2023 Chevrolet Bolt is the cheapest EV in America”

The move likely is aimed at goosing the popularity of the vehicle after the publicity disaster of this past winter. Some 24 Bolt engines spontaneously caught fire while parked, and GM did a massive recall of 140,000 vehicles to replace battery modules. Although an NTSB investigation has now been closed, and although the problem has now been fixed, GM only sold 358 Bolts in the first quarter of 2022, versus over 9,000 in the same quarter the previous year, according to Reuters.

Given the high price of gasoline, the Bolt is now a steal and would save any family a lot of money.

Electric cars are predicted to get cheaper in coming years as mass production allows savings and the technology improves. Batteries have been getting more powerful and less expensive and those trends are expected to accelerate with all the research and development money being poured into this field.

The Nissan Leaf is still slightly less expensive than the Bolt if you take into account a $7,500 federal tax rebate, which GM has sold too many Bolts still to be eligible for. The Bolt, however, has a longer range and is more of a luxury car.

Although Americans are dragging their feet on EVs, so many Europeans and Chinese have brought them that they are already having a measurable impact on the oil market. EVs have reduced demand for petroleum by 1.3 million barrels a day. That is the total daily oil production of, e.g., Algeria!

The world in 2021 produced about 96.5 million barrels per day of petroleum. So, electric cars have reduced global oil demand by 1.3 percent already, and this is only the beginning. Oil may seem like a good investment this year, but I wouldn’t bet my retirement on it (and I don’t).

The petroleum industry tries to raise questions about how environmentally friendly EVs are, since making a lithium-ion battery, along with steel and other materials in an electric car, is a relatively high-carbon enterprise at the moment. But a recent study of EVs in the European Union demonstrated conclusively that over their lifetimes, EVs are about 70% cleaner than internal combustion engine (ICE) vehicles.

It annoys me that journalists often trot out a meme that how clean your electric car is depends on the energy mix in your state’s electric grid. But studies have shown that EVs are dramatically cleaner than gasoline cars even in states like Pennsylvania that still use a lot of coal. Moreover, I and a lot of other homeowners have solar panels on our roofs, so we can run our cars with a fast charger off of completely carbon-free energy from the sun. You are not in fact hostage to your state’s grid. Moreover, having both the panels and the EV helps you pay off both of them earlier than would otherwise be the case.

EVs can be even cleaner. Some 60% of steel is now produced in the US using electric arc technology for smelting rather than coal boilers. If you power the electric arc with wind, solar and battery, then you make green steel that is low-carbon. Volvo is already making some of its trucks with green steel and and has big plans to expand this technique to its other vehicles. Green steel reduces the average carbon footprint of manufacturing a car by 30%. So we aren’t very far from being able to reduce the carbon impact of our autos by nearly 100%.