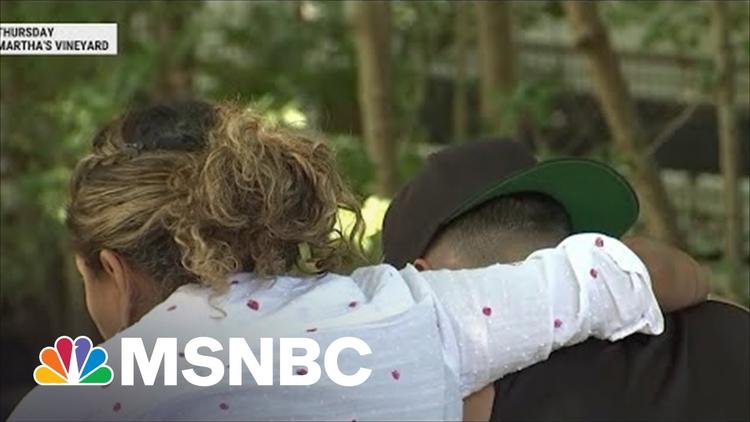 Ann Arbor (Informed Comment) – Stunts like Republican Governor Ron DeSantis’s program of rounding up and flying to Martha’s Vineyard Venezuelan and Colombian asylum-seekers, who are in the country legally awaiting the adjudication of their asylum status, have definite downsides. DeSantis helped run an explicitly racist Facebook page before he was governor of Florida, and continues to be the KKK in a business suit. DeSantis, who wants to be president in 2025, is a publicity hog seeking to make a national name for himself. He thought Florida is the perfect terrain for the politics of racial fear, since the state continually attracts new Hispanic and African-American residents and the whites of Tampa and Tallahassee can be seduced into worrying about whether their dominance of Florida politics will be eroded.

There are downsides to this race-baiting strategy that the pugilistic DeSantis has chosen, however.

First, he is from a fairly recent immigrant family himself. All of his great-grandparents were born in Italy. In contrast, all of my great-great grandparents were born in the United States. On his mother’s side, DeSantis’s forebears came in 1904 and 1917 respectively (Salvatore Storti and his wife Luigia Colucci). That is something to be celebrated. The 20 million immigrants who came in the big wave of 1880-1924 contributed enormously to US prosperity and cultural life. But they were immigrants, and if they just hopped on a ship and came in now the way they came in then, they’d be considered undocumented migrants. Many were Catholic or Jewish or Muslim rather than Protestant. In social terms, if not in the law, they were often considered to be “not white,” especially those in the working class. The second wave of the Ku Klux Klan was as anti-Catholic as it was anti-Black. DeSantis is a right wing Catholic who would have been discriminated against in previous decades. In fact, 11 Italian-Americans were lynched in Louisiana in 1891. So it is hypocritical and shameful for this person from a family of immigrants to play on fears of immigration.

Second, there is also a problem for Greg Abbott, Texas-style anti-immigrant rhetoric in Florida. The state has a large Cuban population made up of immigrants who fled Fidel Castro’s Communism, and the older segments of which vote Republican. This community amounts to six percent of the state’s voters. In short, the Sunshine State has “good immigrants” alongside those DeSantis dismissively calls “aliens” and he has to walk a fine line if he is to avoid alienating the powerful Cuban voting bloc. As it is, 40% of Cuban-Americans voted for Hillary Clinton in 2016, and younger members of the community are skewing center-left like Millennials and Gen Z everywhere in the country. DeSantis’ stunt will be felt as alienating among young Cuban-Americans. Since the people he played the dirty trick on were mostly Venezuelans fleeing an authoritarian, self-styled socialist government in Caracas, their plight may pull at the heartstrings of Cuban-Americans.

Third, the Houston Chronicle editorial board notes the nauseating resemblance of the DeSantis tactic of transporting asylum-seekers from the South with the “reverse freedom rides” of the 1960s that bused African-Americans to places like New York were organized by the 300,000-strong segregationist White Citizens’ Councils in a doomed bid to change public opinion and turn northern voters against the civil rights movement.

Historian Clive Webb in his “‘A Cheap Trafficking in Human Misery:’ The Reverse Freedom Rides of 1962,” Journal of American Studies , Aug., 2004, Vol. 38, No. 2, pp. 249-271 explains that the reverse freedom rides were orchestrated by New Orleans native George Singelmann and that:

“In the continuing propaganda war against white Northern liberalism. The best means by which the Citizens’ Councils could restore their sullied political reputation was to discredit their Northern critics. Singelmann believed that by unloading thousands of unemployed blacks he would test the goodwill of Northern authorities to breaking point. When the Reverse Freedom Riders failed to secure employment they would be forced to add their names to the already bulging welfare rolls of Northern cities. Should those same Northern liberals who denounced the racial intolerance of white Southerners prove unwilling to assist the riders, it would expose their support for the civil rights cause as fraudulent and hypocritical. “‘his is a crude way of putting it,” Singelmann told one reporter, “but we are telling the North to put up or shut up.'”

That sounds exactly like the reasoning of DeSantis and Abbott in today’s Republican Party, as Joy Ann Reid of MSNBC pointed out:

Fourth, DeSantis used Florida state funds to fly asylum-seekers in Texas to the Boston area. Is this a legal use of Florida state monies? Florida state legislators are rebuking the governor over this issue.

Fifth, DeSantis had officials lie to the Venezuelans and Colombians and promise them jobs and gifts if they got on the plane. That move is a form of kidnapping “by inveiglement,” as legal analyst Glenn Kirschner pointed out. It is no different in principle than when a pedophile entices a child into his van with candy, though I’m not alleging that DeSantis has those tendencies. It is the kidnapping tendency that he does have.

Sixth, it didn’t work. The asylum-seekers were welcomed with open arms by volunteers and activists at Martha’s Vineyard, as Jonathan Franklin at NPR explained. If the point was to demonstrate that northern sanctuary cities were hypocritical, it failed miserably.

DeSantis may be toast politically anyway. After the SCOTUS Dobbs ruling and the mobilization of women around the right to medical care and to make choices about their own bodies, it is unclear that the country wants a far right wing Catholic president who wants to abolish abortion rights for everyone in the country.