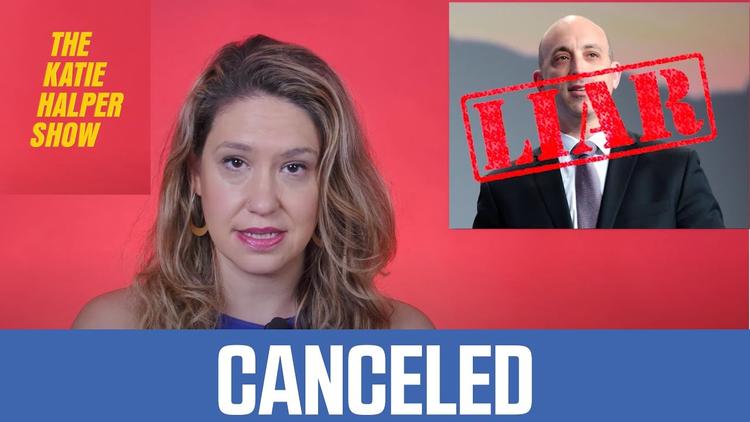 Ann Arbor (Informed Comment) – Journalist Katie Halper of the YouTube channel Katie Halper Show (which can be supported at Patreon) was fired on Thursday from her three-year-long morning gig on “The Rising” at The Hill TV over her remarks on Israeli Apartheid practices toward Palestinians. Both the news site The Hill and The Hill TV are owned by Nexstar, Inc., a giant media company that also now owns 75% of the CW Network, which broadcasts dramas such as “Kung Fu” and “Nancy Drew” aimed at teenage viewers. Nexstar also bought WGN America, a news station that was been widely picked up by cable and satellite broadcasters, and last year Nexstar renamed WGN “NewsNation.” It also owns plenty of TV stations across the country.

Nexstar is a poster child for what is wrong with monopoly capitalism as it pertains to media, and especially news media, and the Biden administration, which wants to bring back antitrust actions, should break Nexstar up.

Halper told Informed Comment by Twitter DM, “It’s scary that it’s so acceptable to not just censor but fire people for stating facts that have been documented not only by human rights organizations but acknowledged by Israeli politicians including prime ministers!”

She added, “I have relative privilege in talking about these issues as a Jewish person. At least I will just get called a self-loathing Jew. Others get called antisemites which can be a really damaging label.”

Actually, I can’t imagine how firing a Jewish journalist for her views on Israel can be characterized as anything but antisemitic in and of itself.

It all started a couple of weeks ago, when, as Informed Comment noted, Rep. Rashida Tlaib (D-MI) remarked in an online webinar, “that among progressives, it has become clear that you cannot claim to hold progressive values, yet back Israel’s apartheid government.” Rep. Tlaib was viciously attacked as a racist for this unremarkable observation by leaders of the Israel lobbies, whose purpose in life is to obfuscate to the American public the reality of Israel’s colonial project in the Occupied Palestinian West Bank.

I said at that time regarding the characterization of those colonial policies as a form of Apartheid, “Those reluctant to come to this conclusion either don’t know what Apartheid is as it is deployed in contemporary international law or are not fully acquainted with the plight of Palestinians under Israeli hegemony. Even long-time opponents of the charge have changed their minds once they’ve been confronted with the reality. Human Rights Watch, Amnesty International, and the respected Israeli human rights group, B’Tselem, have all come to the same conclusion in the past year and a half.”

As it is now used in the UN Convention on Apartheid or the Rome Statute finalized in 2002, Apartheid does not have to resemble exactly the situation in segregated South Africa. It has to do with systematically privileging one ethnic group over another, and systematically disadvantaging people because they belong to an ethnic group.

Ryan Grim at The Intercept reported that on Monday, Halper made Rep. Tlaib’s remarks the subject of her monologue. Ordinarily there is no editorial intervention on “The Rising” — a presenter simply uploads the monologue, and then it is discussed with the co-host. Halper’s comments supporting Rep. Tlaib’s charge that it is hypocritical to adopt a “progressive except on Israel” stance, and concurring that the current Israeli policies toward Occupied Palestinians can be characterized as a form of Apartheid, never aired. At first Nexstar executives appeared to be inclined to instruct her co-host to refute her position by referring to remarks of Jonathan Greenblatt, the head of the Antidefamation League, who has been accused of engaging in hate speech against Muslims. In the end, however, they simply barred the segment from airing.

When Halper approached her superiors at The Hill TV about broaching the subject again, she was fired on the spot by a Nexstar executive.

Journalists have been called the guardians of the truth, and @kthalps just showed us all what that looks like. You don't have to agree with me or Katie, but this censorship should trouble us all. https://t.co/CVB1FdpGm1

Halper, a popular YouTube celebrity and podcaster, had her own means of replying to the controversy, unlike a lot of commentators who get sidelined by the Israel lobbies and who are thereby deprived of a national voice. She replied at YouTube, broadcasting the suppressed segment. I urge everyone with any interest at all in Israel-Palestine to watch her whole program, below. It is like a whole semester’s worth of a university class on Israeli policies toward the Palestinians, presented with clarity, excellent graphics and exciting pacing.

Article continues after bonus IC video
Katie Halper: “The Video That Got Me Fired: Israel IS An Apartheid State”

Phil Weiss and Michael Arria at Mondoweiss, an essential site for the discussion of Israel and Palestine, point out that Halper’s video is going viral and that she is taking a stance popular among young Democratic Party supporters.

An irony to note: Weiss, a long-time professional journalist, was himself once fired for his progressive views on Israel-Palestine, which encouraged him to create his own news site. I remember encouraging him to it in the early days of blogging. You can donate to Mondoweiss here.

About a third of Americans get their news from television and radio, according to Pew. But only five or six major corporations own virtually all the news that can be watched on that medium, and none, zero, is helmed by progressive executives or investors, to say the least. I can’t understand why you would watch anything but Al Jazeera English, myself, which actually covers the world in a professional way, in contrast to CNN, Fox, etc., which mainly purvey inside-the-beltway gossip with panelists who often seem as informed as that eccentric uncle we all avoid on Thanksgiving. There are some good journalists working in TV, but I have a sense that they are heavily censored by their corporate bosses and have trouble getting their reports from the field actually aired when fluff is so much less expensive and so much less depressing.

Of course, even the 50% of Americans who get their news from social media now are often reading articles at outlets like The Hill, which it turns out are not paragons of journalistic integrity or proponents of open democratic debate on important issues.