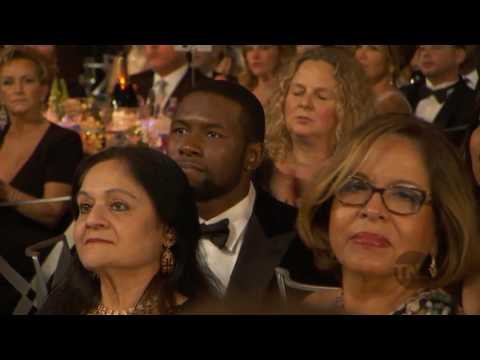 Mahershala Ali, 43, last night won an Oscar for best supporting actor, in Moonlight . The film treats themes of sexual repression, gayness, and the plague of drug dealing and addiction. Moonlight, of course, also won Best Picture, after a historic error in which the winner was initially incorrectly announced as Lalaland.

Ali has been an important figure in American popular culture, having most recently played “Cottonmouth” Stokes in “Luke Cage” (part of the Marvel Cinematic Universe, streaming on Netflix) and having appeared as Boggs in “The Hunger Games” films and as Remy Danton in “House of Cards.”

Ali was born Eric Gilmore in Oakland, CA. His mother, Willicia, who raised him in Cleveland, OH, at some point became an ordained Christian minister. He gained another name, Mahershalalhashbaz, from Isaiah 8:3. This is the symbolic name that God ordained that the prophet Isaiah give to his second son, meaning “quickly seize the spoils, quickly seize the spoils.” God was thereby warning that within months of the child’s birth, the Neo-Assyrian Empire would take Damascus and Samaria. This is the single longest name in the Bible and around 2010 he shortened it. Ironically, many Americans will assume that it is an Arabic Muslim name because it is exotic-sounding, but it is not. It is biblical and Hebrew.

In 2000, when he was in his mid-twenties, Gilmore converted to the Ahmadiyya branch of Islam and took the last name Ali (a reference to the first cousin and son-in-law of the Prophet Muhammad). The late jazz legend Yusef Lateef was also an Ahmadi, a group that began in India and Pakistan and which many Sunni and Shiite Muslims do not recognize as Muslims. But since Ahmadis see themselves as Muslims, that is the way I shall speak of them.

Ali is the first Muslim to win an Oscar since the Academy Awards began in 1929.

Ali had earlier won a Screen Actors Guild Award as best supporting actor for his role of Juan in “Moonlight.” In his acceptance speech, he subtly referred to the pressure the Trump administration is putting on American Muslims:

“I think what I have learned from working on Moonlight, you see what happens in persecution. What I was so grateful about and having the opportunity was playing a gentleman who saw a young man folding into himself as a result of the persecution of his community, and taking that opportunity to uplift him and tell him he mattered, that he was OK. And accept him. I hope that we do a better job of that.

““We kind of get caught up in the minutiae and the details that make us all different. I think there’s two ways of seeing that. There’s an opportunity to see the texture of that person, the characteristics that make them unique, and then there’s the opportunity to go to war about it. And to say that that person is different than me and I don’t like you, so let’s battle.

“My mother is an ordained minister. I’m a Muslim. She didn’t do backflips when I called her to tell her I converted 17 years ago. You put things to the side, and I’m able to see her and she’s able to see me. We love each other. The love has grown. And that stuff is minutiae. It’s not that important.”

In this speech, interestingly enough, Ali used the stigma still all too often associated with gayness as a proxy for the stigma attached in the US to being Muslim in the era of Trump, and pointed to his own multi-religious family as a model for multi-religious America.

As for the question I ask in the title of this essay, you will object that Trump’s Muslim ban only affects non-US citizens from seven Muslim-majority countries.

But as it was implemented by apparently fanatical ICE agents, the ban also had an impact on US citizens, as President Bannon almost certainly intended that it should.

Muhammad Ali Jr., the son of the late renowned boxer, was allegedly illegally detained at the Ft. Lauderdale airport by ICE agents for several hours after he spoke in Jamaica for Black History Month.

You can’t make this stuff up.

Chris Mancini, Muhammad Ali Jr.’s attorney, asserted that his client was kept at the airport for almost two hours and that agents asked him over and over again, “Where did you get your name from?” and “Are you Muslim?”

After he affirmed that he is a Muslim, the officials continued to interrogate him about his religion and his place of birth (Philadelphia). He is a US citizen by birth and holds an American passport.

If white people in America didn’t want African-American Muslims here, they shouldn’t have kidnapped millions of Africans, some 20% of them Muslims, and brought them here as slaves.

So the answer is that Muslim-ness is being othered by the Trump cronies, and American Muslims are being coded as somehow foreign– even though persons of Muslim heritage have been in North America for hundreds of years (long before the Drumpfs got here in the 1880s). And, yes, it is entirely possible that Mahershala Ali could be treated as Muhammad Ali, Jr., was.

Although Mahershala Ali is the first Muslim actor actually to win an academy award, prominent Muslims have long associated with Hollywood and have won Golden Globes and other awards. Omar Sharif, an Egyptian of Christian Syrian heritage who converted to Islam, was nominated for an Academy Award as supporting actor in David Lean’s 1962 “Lawrence of Arabia.” He was also celebrated for his roles in “Dr. Zhivago” and “Funny Girl.” I pointed out that he was never forced to play a terrorist. IMDB has a listing of younger Muslim talent in Hollywood, who are already making their mark.

The five directors nominated for best foreign film, one of them an Iranian, issued a joint statement in protest of the Trump Muslim ban, saying, “We believe there is no best country, best gender, best religion or best color. . .”

And, as noted, Mahershala Ali spoke of the great opportunity of playing an individual “who saw a young man folding into himself as a result of the persecution of his community, and taking that opportunity to uplift him and tell him he mattered, that he was OK. And accept him.”