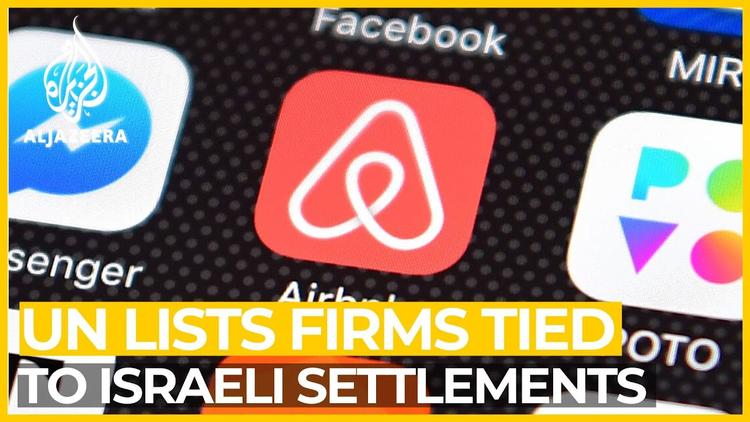 Ann Arbor (Informed Comment) – The UN Office of the High Commissioner for Human Rights on Wednesday released a long-awaited list of 112 companies that do business with Israeli squatters on the Palestinian West Bank. These squatters have most often been covertly sent in by the Israeli government itself to steal Palestinian land, build on it, and profit from its resources such as water and agricultural land.

The United Nations estimates that from 2000 to 2017, the Israeli military occupation of Palestine cost the Palestinians $48 billion.

Michelle Bachelet, the well-regarded former president of Chile, is currently the High Commissioner for Human Rights, and her office issued the report. The timing of the release of report suggests to me that it may be a rebuke to the Trump administration’s attempt to whitewash Israeli crimes against humanity in Occupied Palestine.

The US companies that list rentals in Israeli squatter settlements may be considered to be trafficking in stolen goods and to be cooperating with an Apartheid regime. They include AirBnB, Expedia, and Trip Advisor. The Netherlands-based Booking.com is also named. The Israeli settlements are racially segregated, entirely excluding Palestinians, even though they are on Palestinian territory. It would be like white South Africans not letting black Africans live in some parts of Johannesburg. Oh wait . . .

AirBnB actually briefly in 2018 thought it might cease listing properties in the Apartheid squatter settlements, but backed down when Israel and pro-Israel American Jewish organizations threatened to sue it on the grounds that it would be boycotting Israel and discriminating against Jews (!).

“The European Union has for some time imposed some sorts of boycott on settlement institutions, and requires the labeling of settler goods, and a full economic boycott is under consideration in countries like Ireland.

The argument sometimes heard is that Airbnb is treating the squatters differently than it does other disputed territories. It is a stupid argument and quite dishonest. There aren’t any other countries that are keeping 5 million people stateless and without citizenship in a state, and gradually usurping all their rights and property. The situation in the Occupied West Bank is unique, and deserves a unique response. There are countries that have incorporated somewhat unwilling populations into themselves, giving them a citizenship that they perhaps do not want. But that is different from stripping people of citizenship rights. Citizenship, as a US Supreme Court justice once correctly wrote, is the right to have rights.”

The Israeli military rule of 5 million stateless Palestinians is a form of Apartheid as defined in the Rome Statute of 2002 that governs the International Criminal Court in the Hague.

The Rome Statute (8.2.a) defines as a war crime the grave violation of the Geneva Conventions.

The Palestinian West Bank and the Palestinian Gaza Strip were not settled by Zionists in the first half of the twentieth century and the UN General Assembly did not award them to Israel in its partition plan of 1947. (It wouldn’t have been decisive even if it had, since the UNGA doesn’t have the authority to divide up territory of people– the partition plan was a mere proposal). Israel militarily conquered Palestine in 1967 even though the people there were not in power and played no role in the 1967 war when Israel attacked Egypt, Jordan and Syria.

Israel detached part of the Palestinian West Bank and added it to its district of Jerusalem, which is illegal. It then flooded 350,000 Israelis into this Palestinian territory, stealing their land and resources and leaving them poor and powerless.

Annexation is an act of aggression, forbidden by international law. By the Fourth Geneva Convention, Israel cannot actually deprive Occupied Palestinians of their land rights by simply declaring those lands “annexed.”

In what was left of the Palestinian West Bank, Israel has sent in 400,000 squatters, who live on land to which Palestinians have title and who routinely brutalize the Palestinian villages near them. The squatters are estimated to have chopped down, i.e. sabotaged, a million olive trees belonging to Palestinian families since 1967.

As I wrote on another occasion,

This squatting on Palestinian land contravenes the Fourth Geneva Accord of 1949 on Occupied Territories, which forbids transferring populations from the Occupying Power into the occupied lands.

This rule was to prevent the repetition of the war crimes committed by Nazi Germany, which occupied other lands and sent Germans in to settle them.”